Google is one of the largest companies in the world as we all know. Standing out especially among those devoted to new technologies. It’s present in mobile phones, tablets, computers, search engines and even carries out mobile web app development.

Two of the biggest decisions that Google has taken in the past days follow this wake. Namely, kicking off Progressive Web Apps (in the company that developed WebAPKs) and calling off mobile web app development.

At a first glance, these decisions may seem contradictory. However, Google doesn’t do things at random, which makes us think that something big by Google could be coming soon. But let’s start by analysing this news.

Chromium for Android: the Road to WebAPKs

Google is a very active company in everything that has to do with mobile web app development. They promote things like Chrome applications — for Chrome OS and Android alike — and Instant Apps, which they introduced earlier this year.

Well, it seems like Google is preparing another masterstroke in the ‘realm’ of web applications. This time it comes in the form of Progressive Web Apps. An innovation that will make web applications become more powerful and useful for end users while making them much easier for developers to create.

In addition, Progressive Web Apps may be used in a very special way in Android, as they can be packaged in WebAPKs. All this yields web applications that integrate fully with the Android operating system as a result. 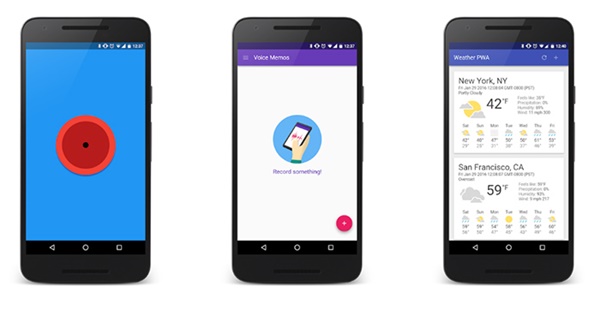 Consequently, they run very much like native applications. Rendering them faster and smoother and integrating them into the same Android graphic user interface.

All this can be achieved by introducing the application in WebAPK. We can then place this WebAPK on Android’s home screen under its own name. Another very important fact is that they have greater permission capabilities than standard progressive web applications and use resources a very efficiently.

The idea of developing simple web applications for desktop operating systems was interesting. Windows or Mac have, in fact, decided to follow this trend too. However, there has been some market analysis going on at the offices in Mountain View and the conclusion reached has been that it’s not in their interest to carry on developing this kind of applications.

Nonetheless, the concept of a universal application is very attractive. Because it makes possible to develop a web application that can run on ChromeOS, Windows, Linux and Mac alike — and all just having to invest in a single development process.

This is something that theoretically should be really attractive for all developers, but the truth is that it’s not gaining much popularity out there in the real world.

Where are we heading towards?

We’re heading towards a much simpler operation. Partly due to the enhancement of standards and the flexible evolution of Chrome’s browser towards an increasingly trouble-free and minimalist version. This will force Chrome Web Store applications to be much lighter. And will contribute to the browser’s evolution during the next months.

While this process is being completed, only Chrome OS users will be able to access these apps through the Chrome Web Store. These apps are thus currently exclusive to this operating system.

Google is making the decisions that it deems to be in its browser’s best interest. The best experts in the field, as well as techie soothsayers, foresee that Chrome OS will eventually become more entangled with Android and vice versa. Hence, we will soon be able to enjoy working on this operating system on Android.

This is something that many will surely find attractive. On the other hand, others may think that Google is on its way to take over the world. However, the truth is that it will definitively make our lives much easier and many of us will be using this operating system.