Home » App » The in-app payments become a source of benefits

The in-app payments have become one of the most controversial elements in the field of mobile applications. In fact, this system of app financing has caused a headache for some mobile manufacturers. However, a recent report released by Distimo notes that in-app purchases are a major source of income for those applications that offer extra content at affordable prices. 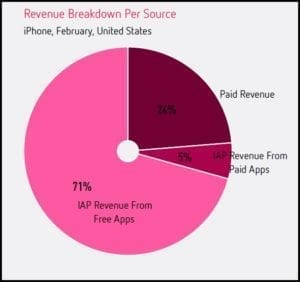 According to data collected by Distimo, last February was the period in which in-app payments moved the most of money. In the United States these purchases accounted for 76% of the benefits associated with mobile applications in the AppStore. Likewise, 71% of mobile tools that obtained the most money in-app purchases are for free, which means that since it is for free and of good quality, it makes the customers pay to enjoy the premium services.

Despite what these figures might indicate, it is in not in the United States where the most money is generated through in-app payments. It is in Japan where those purchases rose up to 90%, a percentage far away from other areas of the world, like the United States or the European Union.

Undoubtedly, the Distimo shows a new way of funding the free apps. These figures represent an alternative for developers who offer their work for free, but that want to escape the intrusive and annoying advertising. But if you really want to make profits with in-app purchases, the application must have a content with quality to encourage users to purchase premium services that improve the experience of using the tool.